Magento 2 Integration with Apple Pay and PayPal One Touch

Rise in popularity of Magento

Following on from Magento 2 vs. Magento 1; What’s New?, this article investigates Magento 2 and its integration with Apple Pay and PayPal One Touch.

Magento, now owned by Permira funds, a London based private equity investment group, is one of the world’s most popular open source software platforms developed for eCommerce. According to the internet retailers Top500 guide, Magento is among the top 1000 retailers in North America 178 use Magento.  Furthermore, in excess of 250,000 websites operate on the Magento platform making it one of the top eCommerce softwares in used by online retailers. The following chart shows the popularity of Magento compared to other popular eCommerce systems according to AheadWorks. 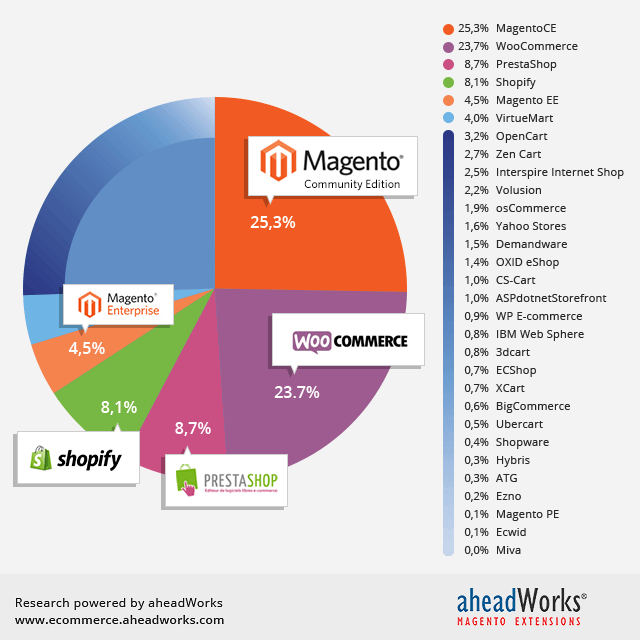 Magento Popularity according to AheadWorks

Magento launched its version 2.0 in September 2015, heralding in a new platform and robust architecture that included sweeping changes from the 1.0 series. Mark Lavelle CEO of Magento Commerce went on record saying that the new changes in Magento 2 make it easier for retailers to expand, upgrade and build features that provide scale, performance and enhanced security for eCommerce sites running on Magento globally.

Early adopters of Magento 2 claim their sites now have 50% faster page load times across site pages, including product and category views. Another big advantage of version 2.0 is dedicated databases for different functions. With Magento 2 you can have standalone databases for order management, cataloguing CRM databases and check out. This allows scalability and it doesn’t matter if several employees are updating your catalogues at the back end, or several customers are checking out all at once,  the site does not slow down.

Use of smartphones to purchase products

While sea changes were happening in the world of Magento, an unprecedented rise in mobile commerce was happening simultaneously. A sharp rise was observed across the world in customers using their smartphones to purchase products directly from the internet. To fuel this new trend, the payment solution providers got into a race to provide their customers with user friendly, convenient systems of virtual pay.

Needless to say, these new developments in eCommerce were backed by the retail industry, as it simply meant added empowerment for their customers and bigger volumes. According to research published by Forrester research on the mobile payments market – 2014 to 2019, the expected rise in mobile payments across Western Europe is almost 24% CAGR (Compounded Annual Growth Rate). Against the backdrop of this exciting scenario, PayPal One Touch and Apple Pay have shown strong growth in early adoption. This article looks at how Magento 2 supports integration with these applications. 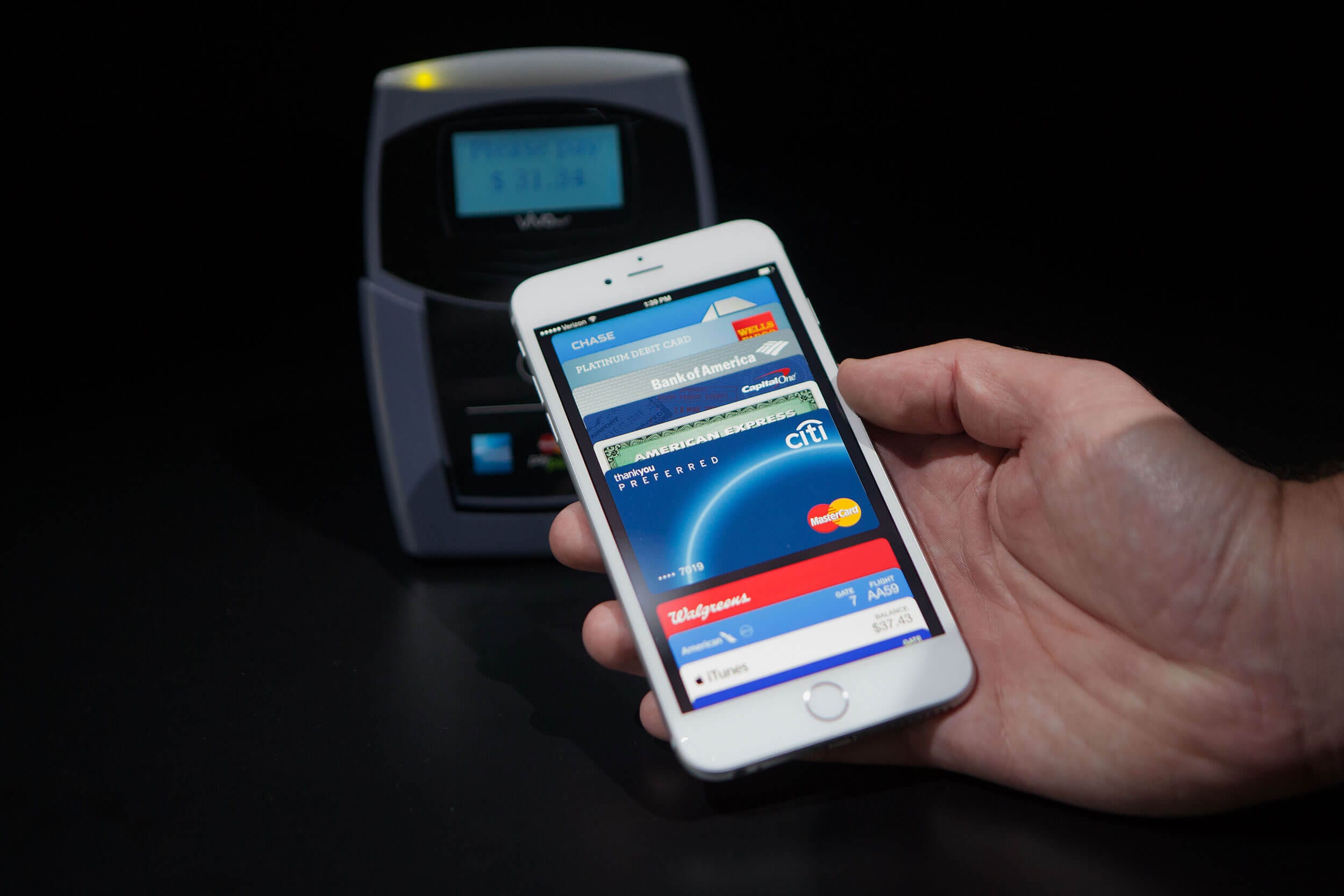 Apple stores this information on their secure servers and claim that their servers are robust enough to prevent hackers. When making a payment, you simply get on the mobile app, choose the credit card you want to pay with and bring it near the payment terminal. Apple uses Near Field Communication (NFC) to transmit data and you need to authorise the payment by scanning your fingerprint on the app. So far more than 220,000 retailers across the US have started accepting Apple Pay as a regular payment method in store and online.

Apple claims that customers save valuable time as they don’t need to search for credit cards in their wallets any longer, take them out, scan them, enter pins, etc.  Interestingly, Apple also claims that their system is way more secure because the credit card details are never shared, transmitted or held on the retailer’s systems. Nor are they on your mobile device. So, if your phone gets nicked, you can use the find my iPhone feature on another computer and register your device as lost. This move allows you to suspend Apple Pay on your device.

With growing numbers opting to pay online via Apple Pay, retailers with their eCommerce stores built on Magento were keen to have their customers use this option in their virtual store. Apple Pay integrates with the virtual store front in much the same way that PayPal integrates on websites. There is a button. But, Apple Pay was built for the iPhone and integrates well on mobile commerce platforms available for the iPhone. On an iPhone the process is really simple. All you have to do when making a payment is to select the Apple Pay option and you’re done. This takes you into Apple Pay.

But Magento based sites have been having problems integrating with Apple Pay. Open architecture is an important prerequisite for developers to build the necessary bridges for successful integration. In fact the success of Magento has been based on this foundation – that several developers across the world were able to collaborate, add features, build APIs and grow the platform to levels of formidable strength.

WordPress and Joomla were also built on the same premise. Unfortunately, Apple does not support this model of development, and that has been the root of the problem. Apple Pay is a native app and therefore doesn’t integrate well with the Magento platform. However, there are some developers out there who are attempting a hybrid solution. For example, check out meets.io, an unofficial Magento SDK (Software Development Kit) developer. They are in the business of building APIs that connect a custom made eCommerce app, incorporating Apple Pay with Magento. So, basically, at this point in time, integration of Apple Pay with a website that runs on Magento 2 can be achieved by building a payment gateway module that works well with a NFC scanner and Magento at the other end.

A number of popular payment gateways in the market integrate well with Magento. These include top of the league ones like Paypal, Braintree, Authorize.net and SagePay. Many of these gateways have incorporated payment processing via Apple Pay. So, for the moment at least, this looks like a viable solution, albeit the lack of synergy between Magento 2 and Apple Pay. 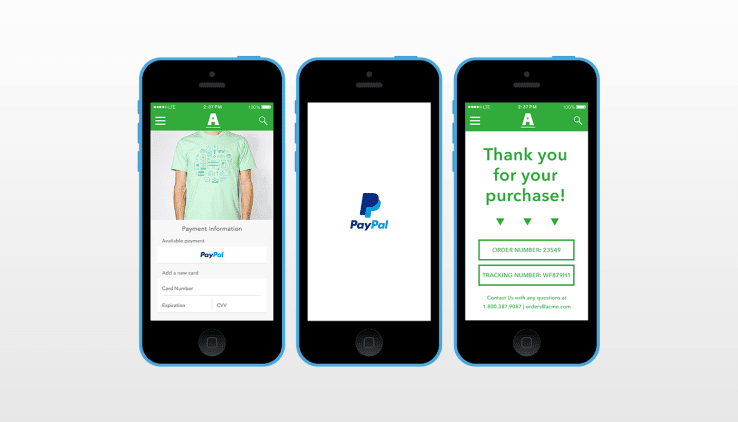 PayPal One Touch for Magento 2

One touch is an optional PayPal feature that simply speeds up your online transaction. Basically when we use PayPal, either on our mobile or on our desktop, we need to log in every time we conduct a transaction.  PayPal then approves the transaction for eligible merchants. When one touch is activated on PayPal there is no need for this step. We are able to proceed directly to the payment stage and go to checkout.  This saves time and the hassle of having to remember and enter the password each time.

PayPal claims that their fraud detection tools are second to none and that the same tools are applied to the One Touch functionality. However, many customers have raised concerns about what would happen if their phone gets stolen. PayPal’s advice to customers has been to simply call customer services if this happens so that the PayPal account can be protected from unauthorised access.

In reality though, if you think about it, there’s likely to be a time gap between a person’s phone being stolen or lost, the discovery of the loss and reporting. This leaves customers vulnerable within a window during which the customer’s account can be misused. PayPal says that all possible steps are taken for customer protection and that customers are advised to use the same device and browser combination while using One Touch. An added security feature, according to PayPal is that One Touch cannot be used to withdraw funds from PayPal. It’s only for purchases.

Paypal One Touch integration with Magento

With PayPal One Touch the integration story has been more successful. Braintree, working with PayPal has developed a few viable solutions. The One Touch for web was launched in April, 2015. These are available in Western Europe and the US at the moment. These extensions are available as drop in as well as customisable modes. Needless to say, the customizable version is likely to require more developer work and greater familiarity with coding. The drop in function works out of the box and is ready to receive payments into your PayPal account when PayPal is activated and logged onto via the control panel. The ’One Touch’ function can be enabled by following the app switch setup guide provided by Braintree. This extension is compatible with Magento from version 1.7 onwards.

On the Magento site itself, we find another extension called ‘PayPal One Touch and In-Context Checkout’. Available through Magento Connect. The developer is listed as PayPal. While the package has some mixed reviews, it’s nice to see PayPal getting into the act and they appear to be quite proactive in dealing with customer feedback.

The convergence of mobile and eCommerce

You don’t need a crystal ball to see where eCommerce is heading. Customers want the convenience of being able to buy online no matter what location they’re in and what device they’re using. They also want speed, security and the freedom to switch between devices – phones, tablets, laptops, etc.

The biggest challenge for payment solutions providers and developers who work with them is scalability and security. Cloud computing seems to provide part of the solution through PaaS (platform as a service) solutions.

Clearly Apple Pay and PayPal One Touch are great from a customer perspective and it would be nice to see developers building more solutions to integrate these with Magento 2 in the near future. It’s also important to remember that mobile commerce itself is fairly nascent at the moment and is fast evolving. Of course this creates the other part of the challenge for developers, i.e. obsolescence.

It is an exciting and hugely interesting space to watch in an industry fraught with competition where everything is moving forward at breakneck speed. The main winners in this war is clearly the retailers, entrepreneurs and customers as they benefit from state of the art technology at a low price point or for free.

Previous articles in the series

How We Can Help

As a Birmingham based eCommerce agency specialising in Magento, we provide a range of advice, consultancy, technical support and marketing to businesses who need help starting up or enhancing their Magento store. If you need any support with your Magento project or integration requirements please don’t hesitate to get in contact with us, call on 0121 371 0435 or email hello@ecommercedesign.agency.